Now that I'm out of protection today in my new main realm, I will start a blog following my progress. I am a rather slow grower.

Today I am nearly out of resources! I upgraded my vault and sentinel yesterday, and trained a bunch of SSDs. I attacked two people who were out of protection (I was one of the first to join this realm).

I got a message from an alliance leader, (not the OL), for attacking one of them:

This one was rather unexpected. I responded

"Not really, I just like attacking people. Soulheart somehow ended up in my bookmarks."

Soulheart had leaked coords in the chat on the first day!

I had to laugh at this; I wonder how many attacks Soul will be getting! It had been a week, and Soul is still on 1k power. I am on a modest 10k, which is average for this realm. I lost two LBM in that attack, I used no other troop.

Queen Saber soon replied to me: 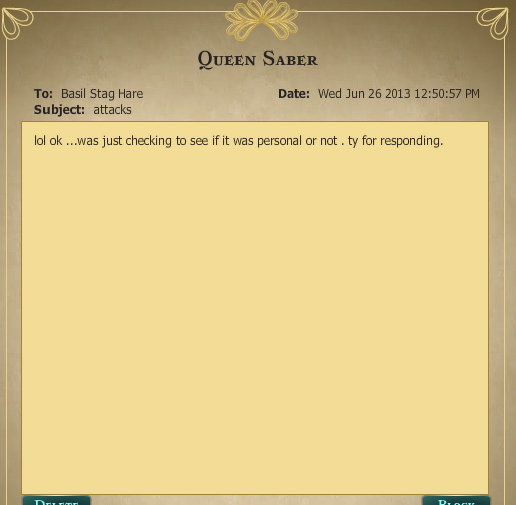 I also attacked someone called Hulk who had attacked an alliance member. I sent all my fluf, with half of my LBM and all my ATs. 20 ATs got killed! I wanted to get rid of the fluff, but losing the AT's was a big surprise: I had even sent a speed bump of 1 SSD to spare my better troops.

I lost no LBM, but how did those AT's die? I know Hulk's LBM are responsible for killing my fluff, but AT's should have stayed behind them until Hulk's LBM were wiped out. Well, anyway, Hulk financed the training of 200 more ATs, so its not a total loss :)

My Dragon is at lvl 5. I am working on getting the rest of the troops needed for lvl 5 Anthropus camps. I am liking this new realm; I finally got a head start! Tuna again decided to be mean, and gave me a speed up. I have got 2k Frost thingys for FG's already, from Tuna, as well as an OP warp and a Mass Nullifier, so I guess she hasn't been too bad this week :)