Start a Wiki
The Dark Slayer is an elite troop that can only be trained in the City with a level 10 Garrison. It is immune to soul revival.

It appears to be true, the Summer Solstice not only brings celebrations of life and rebirth, but also new warriors to fight for Atlantis! The Order of the Dark Slayers once fought to drive the forces of Keres out of Atlantis and seal away her power. Using the same energy that can conjure dark beasts from beyond, the Dark Slayers can channel it for defense and effectively thwart the attacks of spectral beasts. It is said that a full force of these brave knights can even stand up to a Wraith Dragon. 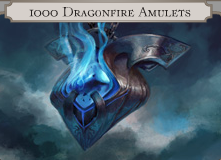 You must have a Dragonfire Amulet for each one these that you train. When a Dark Slayer dies, you do not get the amulet back, and you will NOT be able to revive them in the Spectral Ruins. You can obtain these Amulets from the Shop with Rubies or from level 9-11 Anthropus Camps, only on Kabam.com and Google+.

They may also be won from Fortuna's Chance or Fortuna's Vault on any platform.

100k+ Dark Slayers and a lot of ranged troops as defense can kill a wraith dragon with some losses.

(Picture of a wraith defense would be good)

Retrieved from "https://dragonsofatlantis.fandom.com/wiki/Troops:_Dark_Slayer?oldid=153342"
Community content is available under CC-BY-SA unless otherwise noted.