Dragons Of Atlantis Wiki
Register
Don't have an account?
Sign In
Advertisement
in: Tournaments, Browse, Sanctuary Dragons,
and 3 more

The Tanglevine Hydra (TH) is a Kabam Released Seed ('KRS') and the third dragon to be released in the Sanctuary. 'KRS' are pure DNA dragons that are gained via ruby purchase in the shop, Fortuna's Vault, Treasure Hold (Building within the Main City), Challenges and Tournaments. 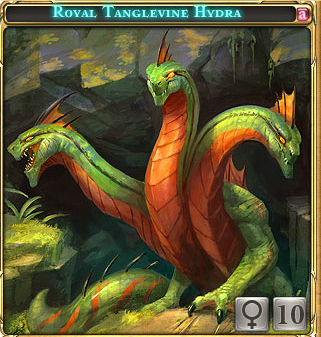 It resembles the classic greek Hydra, having three heads and a long snakelike tail.

Ways to get this Dragon by breeding:

1. Mephitic Serpent and another Dragon

Example of a Tanglevine Hydra won through an Event

It was released for a very limited time in a Fortuna mini game Heavenly Wheel on April 4th, 2013.

The version released in the Heavenly Wheel had:

The Exalted egg of this dragon, among others, was also included in Fortuna's Vault for a short time.

There has been 6 Tanglevine Hydra's (TH) released by Kabam of various Hierarchies. Though at this time no Omniscient has been released.

Please note that a Legendary 'KRS' automatically comes with all 3 traits at (Lvl 10) X and doesn't require enchanting. However this has caused issues since the release of Master Crystals and the addition of the 4th Trait. This is because the 4th trait automatically starts at (Lvl 1) I.

1/4
Community content is available under CC-BY-SA unless otherwise noted.
Advertisement