The hide of the resilient and dangerous Stone Dragon is made of living rock, and is a mighty opponent in battle. Long thought extinct, their Eggs are now being found in level 7+ Hills around Atlantis. The sturdy Stone Dragon is similar to the Water and Great Dragon in its attacking abilities. It is raised in your Stone Outpost and will protect it when attacked.

This dragon can currently be upgraded to level twelve. Battle Arts are available after your Stone Dragon reaches level 11.

Different colors of armor and scales can be won from Fortuna, which boosts your Dragon's stats. For special events, like Halloween, sometimes exclusive armor is offered for a limited period of time. You can also find some armor and scales in certain chests.

The Stone Dragon may be bred with other Dragons in the Sanctuary. Initially, the Great Dragon is the only female Dragon available.

The Stone Dragon's Egg is found by defeating Level 7+ Hills.

This Dragon's Armor may be obtained from Level 7+ Hills.

Note: If you feel stuck and are not getting the egg when you are waving, try to wave a different hill. The chance to find the egg is random, wich means it is different from hill to hill. 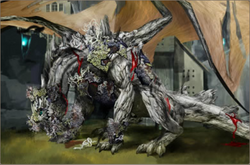 If your Dragon is defeated in battle, it will be heavily injured; however, your Dragon will never die. Generally, the number of troops needed to clear a Camp or Wild is enough to ensure your Dragon will survive an attack, although it should be noted that the Dragon's range or speed may interfere in battle if included with certain troops. Click here for details.