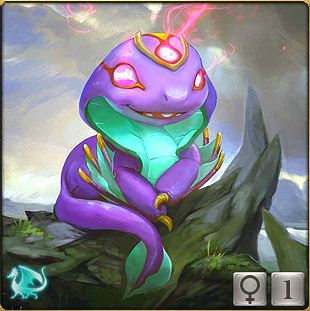 The Psychic Dragon (PsD) is a Kabam Released Seed dragon that is now available within the Sanctuary.

The Kabam Released Seeds 'KRS' are pure DNA dragons that are gained via ruby purchase in the shop, Fortuna's Vault, Treasure Hold (Building within the Main City), Challenges and Tournaments.

The Psychic Dragon is second dragon released in the Sanctuary.

Example of a Psychic Dragon won through Challenge/TournamentEdit

Ways to get this Dragon by breedingEdit

This particular species of dragon is perhaps the easist to breed from other species. However this will mean that it carries genetic traits of the parents that the egg came from. (Note:- Always keep an update log of your breeding so you know where it comes from)

There has been seven (7) Psychic Dragons (PsD) released by Kabam to sanctuary. This includes Heightened through to Omniscient and both sexes, this allows for pure breeding and trait grouping within the Psychic Dragon (PsD) gene pool.

Retrieved from "https://dragonsofatlantis.fandom.com/wiki/Psychic_Dragon?oldid=152823"
Community content is available under CC-BY-SA unless otherwise noted.