This dragon is swift, and has strong, short ranged attacks, making it formidable in close quarters. It is compatible with Swift Strike Dragons , Battle Dragons , and Banshees, but not ranged troops, as the other Dragons are.

He resides in the Sunken Temple. In order to evolve it from an Egg to an Adult, you must upgrade its Dragon Keep.

This dragon can currently be upgraded to level eleven. Battle Arts are available after your Mephtic Serpent reaches level 11.

The Mephitic Serpent may be bred with other Dragons in the Sanctuary. Initially, the Great Dragon is the only female Dragon available.

The Mephitic Serpent's Egg is found by defeating Level 7+ Lakes. Using a Wraith Dragon to find this Dragon's Egg significantly increases the odds of finding it(may be outdated).

The Serpent Scale may be obtained from Level 7+ Lakes

Scale is automatically equipped when it is found. If it is not, you may need to contact Kabam Support. Serpent Scale may be obtained anytime before or after the Dragon is level 8.

Note: If you feel stuck and are not getting the egg when you are waving, try to wave a different lake. The chance to find the egg is random, wich means it is different from lake to lake.

After finding all 4 pieces of Scale, you will be ready to send your Dragon to battle!

Note: It may be beneficial to attack level 5-6 Lakes if you are farming for the Mephitic Dragon Egg.


You don't need the Great Dragon any other Dragon to obtain the egg, however you must have the Spectral Ruins and the Ice Outpost before obtaining the egg in the Wilderness. 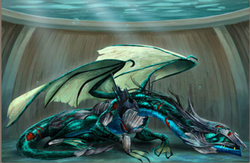 Because of their stats, some troops are more compatible than others with troop types. This is typically due to incompatible ranges or speeds.The Mephitic serpent is one of the very few dragons who are compattible with speed troops.