Dragons Of Atlantis Wiki
Register
Don't have an account?
Sign In
Advertisement
in: Browse, Guides, Troops,
and 6 more

Warning: Some of the info on this page may be outdated. 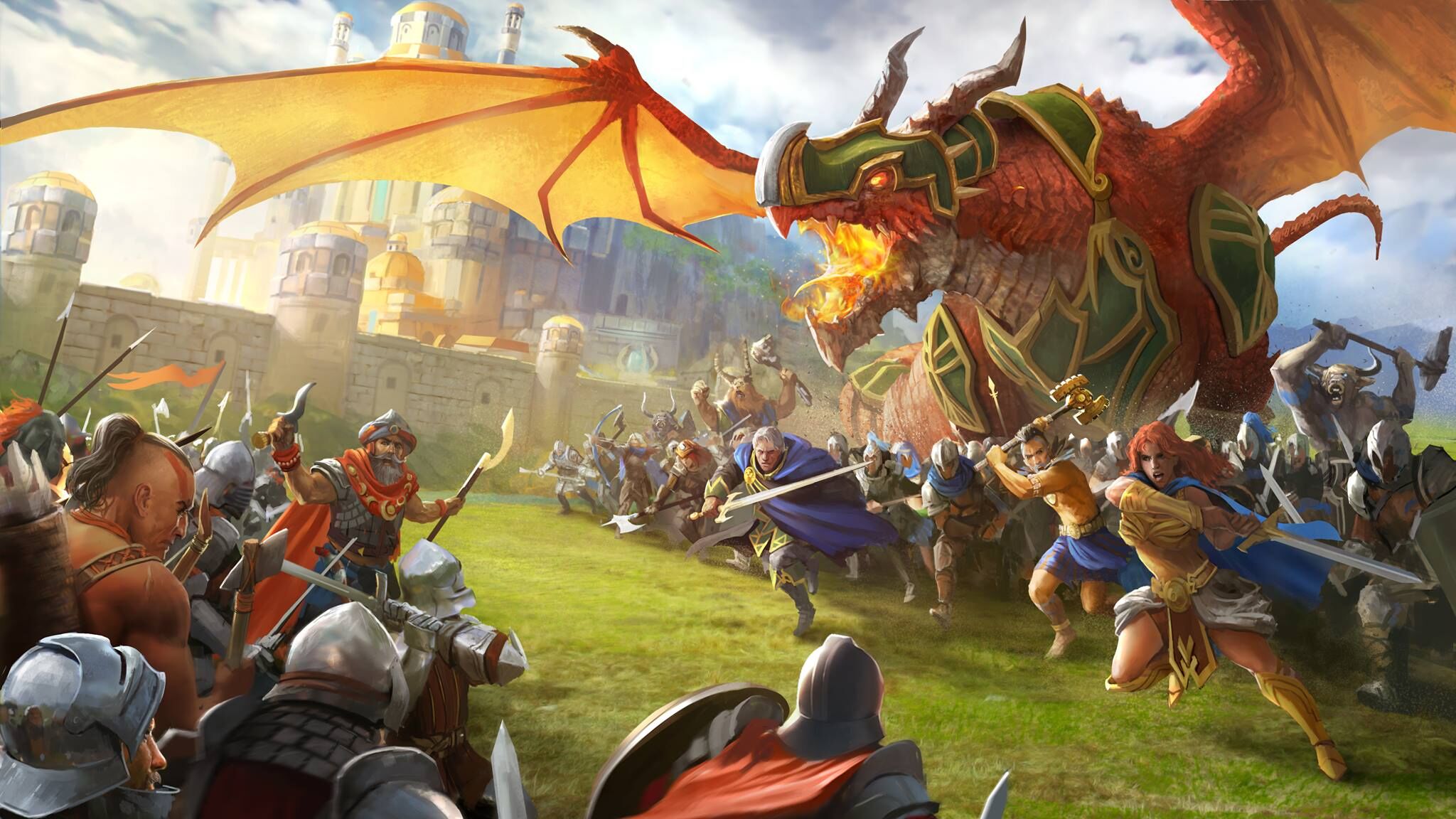 Now there are very many kinds of troops in the game, and attacking and defending is an important element. You can play as you always have if you want – just continuing to grow; there is ABSOLUTELY NOTHING wrong with that! If you want to do battle this information will hopefully get you started in understanding battle strategy and troop deployment.

Since Dragons of Atlantis is a computer program, attacks are constructed mathematically. Many players have attempted to figure out the concepts of the battle algorithms. Presented here is an attempt to distill information from several web sites and a little of my own understanding. Please remember two things about this: First, it is an educated guess, which means it’s still a GUESS; and second, Kabam can – and does – make modifications to the program, so things CAN and do change.

IF there were only one type of troop, all battles would be simply a matter of who brings the most to the party – a battle of attrition. Just like in the real world, when you want to win you try to make a better weapon; same here.

All battling troops can be considered either Melee, Speed, or Ranged. Think of them as a triangle or circle: generally Speed beats Range, Range beats Melee, Melee beats Speed; “generally”, because just like the real world, if one that SHOULD be beaten is significantly bigger it will sustain the lesser damage so the other one will die (example: a Conscript is Melee, but a battle Dragon a Speed – will wipe him out every time!)

There are some troops which do not fit into the melee-speed-ranged categories. Venom Dwellers and Dimensional Ruiners are close to being here, but fit in their respective categories well enough.

Every troop type has a set of statistics or attributes; these are shown on the training (wiki also has this info). These are “starting” points; certain researches will improve these numbers.

Research affects statistics in various ways. The most imporant are Wep Cal, Met and Med. All percentages given are per level.

Let’s look at how a battlefield is built in the DoA program: First, Battlefield length is set by the range of the troop with the longest range, regardless of the troops belongs to the attacker or the defender..

If you read web pages on this some will tell you the length is 500 units; that is incorrect. The base size of the battlefield is 0 (Zero).The lenght of the battlefield is equal to the range of the troop with the highest range in the battle, regardless if it is an attacking or defending troop. When calculating the longest range and lenghts of field, all kinds of boosts like forge, sanc and research range boosts are considered.

i.      Since the fastest troop type moves first, you know it will potentially encounter an enemy first. Remember Range troops can still potentially strike before speed does even though speed makes the first move forward; if the faster troop’s speed value is lower than the range value of another troop the higher range troop is covering that faster troop’s move forward (like artillery covering infantry advance). If you understand that concept then it’s simply a matter of looking at speed and range numbers of the mixed troops to see if something is getting too far ahead of the rest of the army, and in turn if that is OK; if the range troops have taken out the biggest part of the defenders, or the melee/health of the faster troops is high enough, then advancing is fine.

ii.      A technique some players use is something called “Speed Bumps” or “Rainbow” attacks; an attacker will send one speed troop, one range troop and/or one melee, one right behind the other; then the main army comes. The result is it extends the battlefield and engages the defenders troops too soon (for the defender), so the main army is able to decimate the defender. This is an advanced method – one I have not yet used, but is extremely effective when done properly; timing is critical for it to work!

i.      IF there is time to tell exactly what is being sent, and IF the defender has the proper troops to defend, defending is an excellent way to wipe out armies (but REMEMBER that is a two-edged sword – if you are the attacker it is possible you can an be on the bad end!)

ii.      If you are defending, be VERY CAREFUL! Some players will send a “teaser” attack to get you to wall, then once they see you walled they will send a “real” attack that they speed so you don’t have time to un-defend! Great technique if you are on the attacking end, not so on the defense!

iii.      Remember that as part of an alliance w are able to reinforce each other! That means if you don’t have the troops to defend others might; and it CNA be multiple other members. If you reinforce someone, there is no hiding at their city, only defending. If someone is reinforcing you, your troops are NOT also reinforcing unless you put troops up – just as if the other player’s troops were not there. Remember to be VERY CAREUL just as mentioned above! Also remember timing is important – if the reinforcements don’t get there (or recalled) in time ....

iv.      The positive side of defending is if a player constantly attacks it is a good way to stop him for a while – at least while he retrains troops!

a.       Speed attacks including Chrono Dragon attacks can be performed every 24 hours. If you are the attacker, think about whether that is truly the target you want to speed attack. ALSO remember the opponent may have his Chrono; also you or he may have speedups! So always keep that in mind, whether you are the attacker or the defender.

i.      The Wraith can be used to attack a city; you will have to wait until you have talismans again to send it out the next time. Figure about a week to collect them! So be very JUDICOUS in sending it! I do not usually send mine unless I want to hit a BIG player who is walled! If they are not walled, obviously a regular army will bring back the spoils. Also, since now there are very many anti wraith boosts and troops, not to mention powerful players, be careful that you do not "waste" your talismans and blue energy.

ii.    Defending Against the Wraith

If you are a smaller player, it is wise not to defend against wraith attacks.

Enough boosts can make a few spies defeat a considerable number of SSD, so it is wise to keep boosts in mind at all times during combat.

i.      If you include Soul Reapers in your armies they are able to collect a percentage of the troops killed. The Guardian Revival will let you collect your ENEMY’S troops when you are defending. Soul Reapers only "steal" souls when defending.

1.       Revival uses Blue energy, but NO other resources(except time if that counts)!

2.       The Mausoleums are the “holding tank” for souls; the Portals are the reviving locations (you can think of them kind of like the garrisons); the Reaping Stones (in the field) collects/produces the blue energy.

3.       I would recommend lots of mausoleums to hold souls; it might take a little longer with less portals, but souls will at least be stored with more mausoleums.

ii.      A very nice side effect of collecting enemy souls is that you can get elites you might not otherwise be able to train yourself yet!

Since there is a continuous circle, where do we begin to figure out a battle?

It is possible it is not a Speed troop; if only Range and Melee troops were sent, it will still be the Highest speed of those.

First, if it were the real world, an army comes to attack a city. If each army has just sword and club-wielding troops (Melee) it’s a matter of who has more/bigger troops and clubs. Easy enough. Fastest troops get to the enemy first and begin hitting.

Now let’s add the advent of bows and arrows (Range): The army with those can attack farther away than a sword or club is going to be of any use. Thus, Range should beat Melee. However if you have an archer against say a Giant, the Giant can take a lot of arrows as he advances (Health), so when he finally gets to the archer, the archer is going home in a body bag. So we develop the catapult (Lava Jaws).... and on we go in the medieval arms race.

Since Speed moves first they can get a chance to get in striking range. They can beat Range troops simply because they get to move then make the first hit. Presuming there are enough of them and/or they are stronger, Range dies; if you can close the range, get in striking distance and make the first blow, the arrows are pointless – for that one round (remember the other army gets its turn!)

If you were to send a single Battle Dragon against a Great Dragon the BD would of course die; but if you sent another attack, and another and look at the Great Dragon’s damage each time you would see it may change from one attack to another. This is because the program uses a Random Number Generator as an attempt to make a battle more realistic (I'm guessing the program simulates that not all arrows will hit, a sword grazes rather than penetrates, etc). That randomness is extremely important to keep in mind!