The Frost Dragon is both sturdy and swift. With its icy hide, it can defend against a powerful army’s attack, while still retaining an impressive speed. These noble and somewhat fickle dragons prefer to remain reclusive within their mountain caves.

Once it has been raised to adulthood, the Frost Dragon retains a strong bond with its master and will fight ferociously to defend its home. As with other dragons, to evolve it from Egg to an Adult you must upgrade its Dragon Keep. This Dragon resides in the Ice Outpost.

Unlike any other dragon, the Frost Dragon has two elite troops. The Soul Reaper and the Frost Giant.

This dragon can currently be upgraded to level 12. Battle Arts are available after your Frost Dragon reaches level 11.

The Frost Dragon may be bred with other Dragons in the Sanctuary. Initially, the Great Dragon is the only female Dragon available until you successfully breed another female dragon.

The Frost Dragon's Egg is found by defeating Level 7+ Mountains. Using a Wraith Dragon to find this Dragon's Egg significantly increases the odds of finding it.

You must have the Spectral Ruins before obtaining the egg in the Wilderness.

This Dragon's Armor may be obtained from Level 7+ Mountains.

Note: If you feel stuck and are not getting the egg when you are waving, try to wave a different mountain. The chance to find the egg is random, wich means it is different from mountain to mountain. 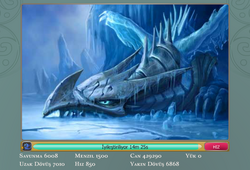