The dangerous Fire Dragon is similar to the Great, Water, and Stone Dragons. It is raised in your Fire Outpost and will fiercely defend it when attacked. This Dragon is the embodiment of lava and will destroy opponents with a mighty blast of fire during combat. You must upgrade the Dragon Keep in your Fire Outpost in order to make it evolve from an Egg to an Adult.

This dragon can currently be upgraded to level twenty. Battle Arts are available after your Fire Dragon reaches level 11.

The Fire Dragon may be bred with other Dragons in the Sanctuary. Initially, the Great Dragon is the only female Dragon available until after you successfully breed another female.

The Fire Dragon's Egg is found by defeating Level 7+ Mountains.

This Dragon's Armor may be obtained from Level 7+ Mountains.

Note: If you feel stuck and are not getting the egg when you are waving, try to wave a different mountain. The chance to find the egg is random, wich means it is different from mountain to mountain. 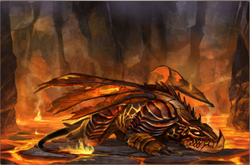