This article is a stub. You can help Dragons Of Atlantis Wiki by expanding it. If you have any other relevant information, we would be grateful if you shared it.
.

This extension of the Defensive Tower was released September 11 2014. 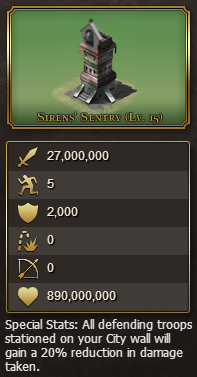 An increase in population, trade, and warfare has left the seas surrounding Atlantis a traffic hub'. For centuries the Sirens, sea monsters that assume the shape of beautiful women, lurked along rocky coasts and straits. Perched upon the rocks, they’d sing their beaut'iful but deadly songs onto the wind. For if any heard their mysterious melodies, they’d fall into a 'trance-like state that’d lure them toward their inevitable demise.

Fortunately for most citizens, the Sirens would keep themselves secluded and areas in which they lurked were mostly avoided.

But as Atlantis grew, more and more citizens found themselves entering into the clutches of the Sirens. In order to keep his people safe and prosperous, Archmage Triton sealed away the voices of the Sirens. One by one he has confined their hypnotizing tones into mystical bells. Seeing the opportunity the bells had as a tool for the citizens of Atlantis, the craftsman Hephaestus created a new part for your cities’ Defensive Towers to harness the Sirens’ alluring voices.

The Sentry functions primarilary at a defensive Capacity. It is said that the harmony is so dangerous and captivating that it weakens enemy attacks, causing your defending troops to take 20% less damage while defending.

Retrieved from "https://dragonsofatlantis.fandom.com/wiki/Defensive_Tower:_Siren%27s_Sentry?oldid=155227"
Community content is available under CC-BY-SA unless otherwise noted.