The Chrono Dragon is a creature of artificial origin. Born from the knowledge of Chronos, this beast has the power to speed any march it accompanies to its target instantaneously! [30-40 sec. average] Those who can complete this Dragon will possess an enhanced first strike capability. Acquire the Cliffs of Chronos as your next outpost!

This dragon can currently be upgraded to LVL 20. Battle Arts are available after your Chrono Dragon reaches level 11.

The Chrono Dragon cannot be bred with other Dragons in the Sanctuary. Initially, the Great Dragon is the only female Dragon available.

You do not need a Water Dragon or Spectral Ruins to get this Dragon.

It is also usually the easiest dragon to find besides the Water Dragon.

The Chrono Dragon's Core is found by defeating Level 8+ Plains.

This Dragon's Servos may be obtained from Level 8+ Plains.

Note: If you feel stuck and are not getting the core when you are waving, try to wave a different plain. The chance to find the core is random, wich means it is different from plain to plain. 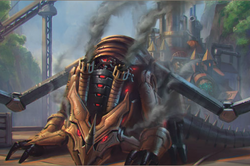 The Chrono Dragon can only be used once or twice per day depending on the level of Aerial Combat and your Chrono's level.

The price of having a dragon so powerful it can manipulate time is a long healing time. This is to prevent exploitation of its unique ability.