Places where magic and nature meet. This convergence is known as a Gaea Spring. These Gaea Springs are the most fertile lands in Atlantis. Any resource generating building built on these grounds will yield resources twice as fast.

The rare dragon of these springs, the Amber Crest Dragon, has resource generation abilities as well that may help you recover more resources from Wildernesses you attack, although you have to attack a non-owned wilderness to get the resource boost.

This dragon can currently be upgraded to level eleven (11).

The Amber Crest Dragon may be bred with other Dragons in the Sanctuary. Initially, the Great Dragon is the only female Dragon available until after you successfully breed another female.

Note: When using your Amber Crest Dragon to farm resources, you must send it with enough transport troops to carry 10 million resources.

This Dragon's Amber Vestiments may be obtained from Level 7+ Forests

Amber Vestiments are automatically equipped when it is found. If it is not, you may need to contact Kabam Support. Amber Vestiment pieces may be obtained anytime before or after the Dragon is level 8.

Note: If you feel stuck and are not getting the egg when you are waving, try to wave a different forest. The chance to find the egg is random, wich means it is different from forest to forest.

After finding all 4 pieces of Amber Vestiment, you will be ready to send your Dragon to battle! 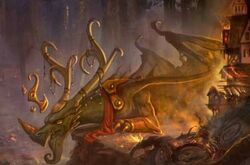 The Amber Crest Dragon has an unique ability and the long healing time is required to prevent exploitation of its ability. Its healing time is long regardless of your level of Aerial Combat, but it is possible to include the dragon in a march twice a day.

The Amber Crest Dragon has the special ability that allows it to gather 10mil of the corresponding resources when sent on an attack to a Wilderness regardless of the Wilderness' level. This does not work if wilderness belongs to someone. You must also send enough troops to carry the 10 mil resources back, your Amber Crest Dragon cannot carry resources without transport troops.
Troops that can carry 10M food:

Resources produced in the Gaea Springs will also produce twice as fast as they would in other Outposts making this an excellent place to build fields if you would like to produce more.

Resources this Dragon may summon: (Once per day)

Note: Do not mix ATs and PDs together. Use one or the other, not both.